This season long campaign followed the road trip adventures of two guys (Will & Ravi) on their way to the biggest game of the week for college football: ESPN College GameDay. But to get into the game they had to use the AT&T network and their ingenuity to navigate scripted “challenges.”

Our challenge was not knowing the location of ESPN College GameDay each week.

Which meant between Sunday and Thursday each week we had to concept, write, shoot, edit and deliver a finished :60 piece of content.14 weeks, 20k miles, and 65 pieces of branded content later AT&T became the #1 recognized corporate sponsor of college football,On the Way to Saturday.

Showcase the power of the AT&T network while uniting the brand’s collegiate football properties. Leverage the excitement around ESPN College GameDay to create entertaining, relevant content for college football fans to develop deeper engagement throughout the season.

We gave two lucky fans every college football fan’s dream – a road trip to all of the ESPN College GameDay locations AND a place on camera. The catch? They had to earn it by completing crazy challenges each week with the help of the nation’s largest 4G network and fans around the country. 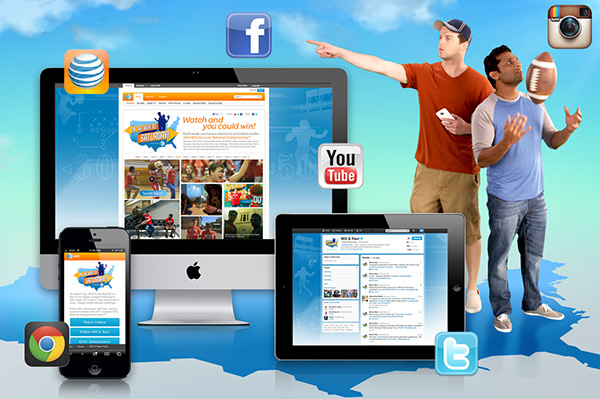